“The Power of Language
for Global Reach”

Top 10 Languages Of The World

India is home to many major languages. The main feature of human existence is the language that helps humans to communicate with each other and develop relations with one another. Throughout history, languages have developed from various linguistic elements and spread through trade, colonization, immigration, and cultural interactions.

Let’s Look At The Top 10 Spoken Languages Of The World :

There are approximately 7,000 languages in the world, each having their histories. Some languages are widely spoken than the rest. English, Mandarin Chinese, and Spanish are among the world's most commonly used languages. As per a study done in April 2017 by Bling News, the top 10 languages used on the web are Chinese, Spanish, English, Hindi, Arabic, Portuguese, Bengali, Russian, Japanese, and Punjabi. Multi-lingual website in the top 10 language covers more than 80% of world web users. This makes website localization, services, the most powerful and cost-effective solution to increase business presence globally. 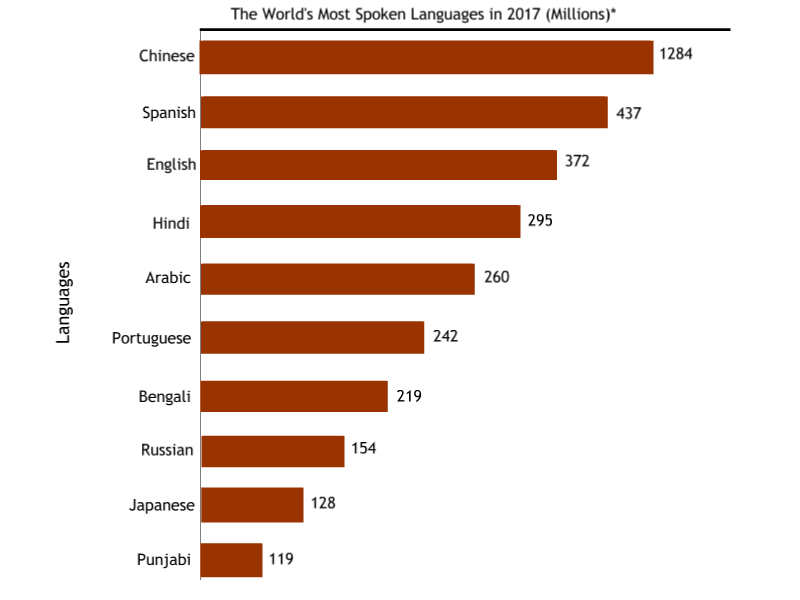 Today the world speaks 6,000-7,000 tongues, but their popularity is different. For instance, the English language serves as a primary means of communication for people from different nations, while others are distributed within small communities. Therefore, let us know which are the top 10 languages by a number of native speakers. All figures are estimates as it can be challenging to determine how many speakers exist of any given language.

Now that you are aware of the top 10 languages of the world, which of these global languages do you want your business to speak? From 30+ years, Shakti Enterprise is assisting companies to manage heavy footfall in the international market. With offices in Mumbai, Delhi, Pune, Bangalore, Hyderabad, we are committed to breaking all communications barriers which can create obstacles in your business. We provide translation in 100+ languages, and our main USP includes quick turnaround time, proficient translation and translation accuracy guarantee.

"Delivering quality, timely service and giving value for money are the essential principles on which we do business"

Language Translation- An Important Medium in Communication and Literature

How to Overcome the Difficulties in Translation Process